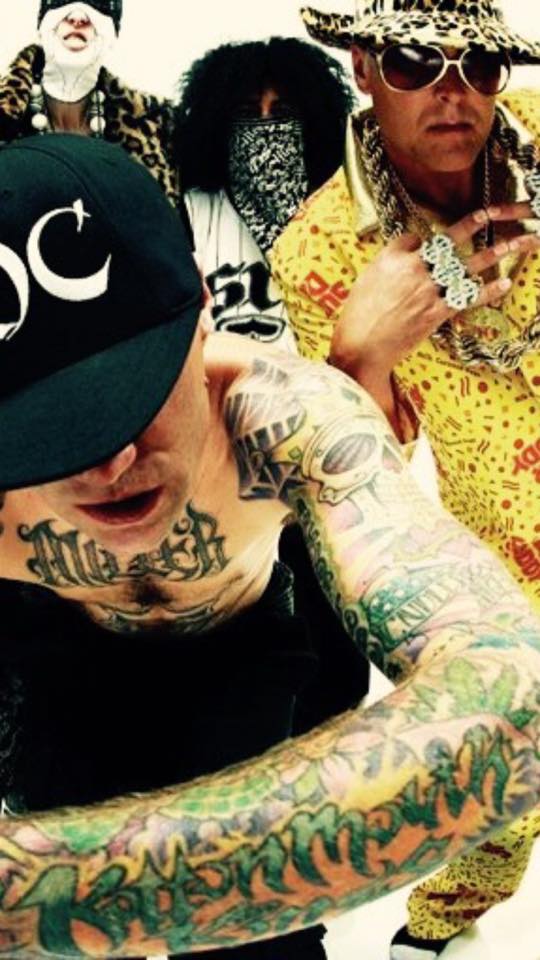 Kottonmouth Kings, the world’s most notorious, hard-puffing, traveling circus of a hip-hop/punk hybrid are ready to take you on their longest, strangest trip yet….Rollin’ Stoned, out October 8th on Capitol/Suburban Noize.

“It’s all about positive energy, positive vibes and creating your own reality,” says band MC/producer Brad X of the underground heroes’ newest joint, Rollin’ Stoned and its first single, the aptly titled “Positive Vibes.” The band’s fifth full-length album, Rollin’ Stoned is a relentless, heavy-lidded, point-blank, genre-hopping headtrip that lets the sun shine in but also comes down like a hammer.

Produced in-house by Brad X and longtime collaborator Mike Kumagai, Rollin’ Stoned breaks new boundaries, at times delving into acoustic playing and incorporating the melodies and instrumentations of numerous styles and cultures. “Rest of My Life” is a stoner campfire singalong, the ultimate pledge of allegiance to the devil’s weed; “Full Throttle” has a paint-peeling punk rock blast; “4-2-0″ is a slinky, smoky hip-hop bouncefest; and “Positive Vibes” is a roof-down, feelgood super-anthem with a hook that won’t let go. As with their previous releases, 1998′s Royal Highness, 1999′s Hidden Stash, 2000′s High Society and 2001′s Hidden Stash II, the Kings continue to push forward without musical limitations.

Kottonmouth Kings have been a blazing underground force since 1994. Notorious for their hardcore anti-establishment ethos and high profile, pro-pot legalization stance, there are few other artists who’ve remained as consistently vocal about their convictions. “We’re out there in the forefront of the fight,” says Brad X. “We get harassed by the authorities like clockwork, but any troubles we’ve had have only made us stronger. People everywhere are realizing that spending time and money on hassling people for smoking herb is a joke. The war on drugs was lost a long time ago and we’re here to dance on its grave.”

While one of their proudest moments was definitely being named Band of the Year at the High Times 2000 “Doobie” Awards, KMK have many other accomplishments to tout. To date, Kottonmouth Kings have sold over 700,000 records in the U.S. and their recent DVD “Dopeumentary,” debuted at #6 on the Billboard Top Sales chart. The band has also developed a DIY franchise that includes their flagship label Suburban Noize (with releases by Corporate Avenger, Mixmob and KMK’s own DJ Bobby B), merchandising, clothing line, and management company (SRH). And they do it all grassroots, with street teams that have been supporting the band for years and a strong web presence that keeps them constantly in touch with their loyal, always-growing fanbase.

Having toured internationally several times over, logging almost 500,000 miles of road globally and consuming approximately 97 pounds of marijuana in 272 strains, the Kings are fully aware there are a lot of stoners out there and they aim to reach as many of them as possible. “We’ve got everybody at our shows: whites, blacks, asians, Latinos, rastas, ravers, punkers…girls and guys,” says Brad X. “I’ve seen more Kottonmouth Kings tattoos on more kinds of skin than ever.”

One reason for their universal appeal is the KMK live experience — a complete headrush of a stage show that’s about to get even more intense. The pending fall tour features huge trippy projection screens, giant inflatable pot leaves and a fully functional illuminated bong. A production of epic proportions, the show will shower fans with “Positive Vibes” from the first dropped beat. The same can be said for the 18 nuggets found on Rollin’ Stoned, which guarantee another ultimate high for fans and an instant buzz for first-timers and prove, yet again, that this bus runs on a lot more than fumes. Hop on board October 8th.

All the Kings Men:

Johnny Richter: rhymin’, street hustlin’..oh, and has a five-foot iguana.

DJ Bobby B: A longtime DJ in the L.A. hip-hop scene, he’s also a Suburban Noize artist whose record, Built From Scratch, came out in 2001. He’s also an expert freestyle motocross rider who rides with X-Games champion Mike Metzger.

Pakelika: AKA the visual assassin. This mysterious masked man, a mainstay of the KMK live show, has perfected his own full-body visual animation called “hydro-mechanics.”