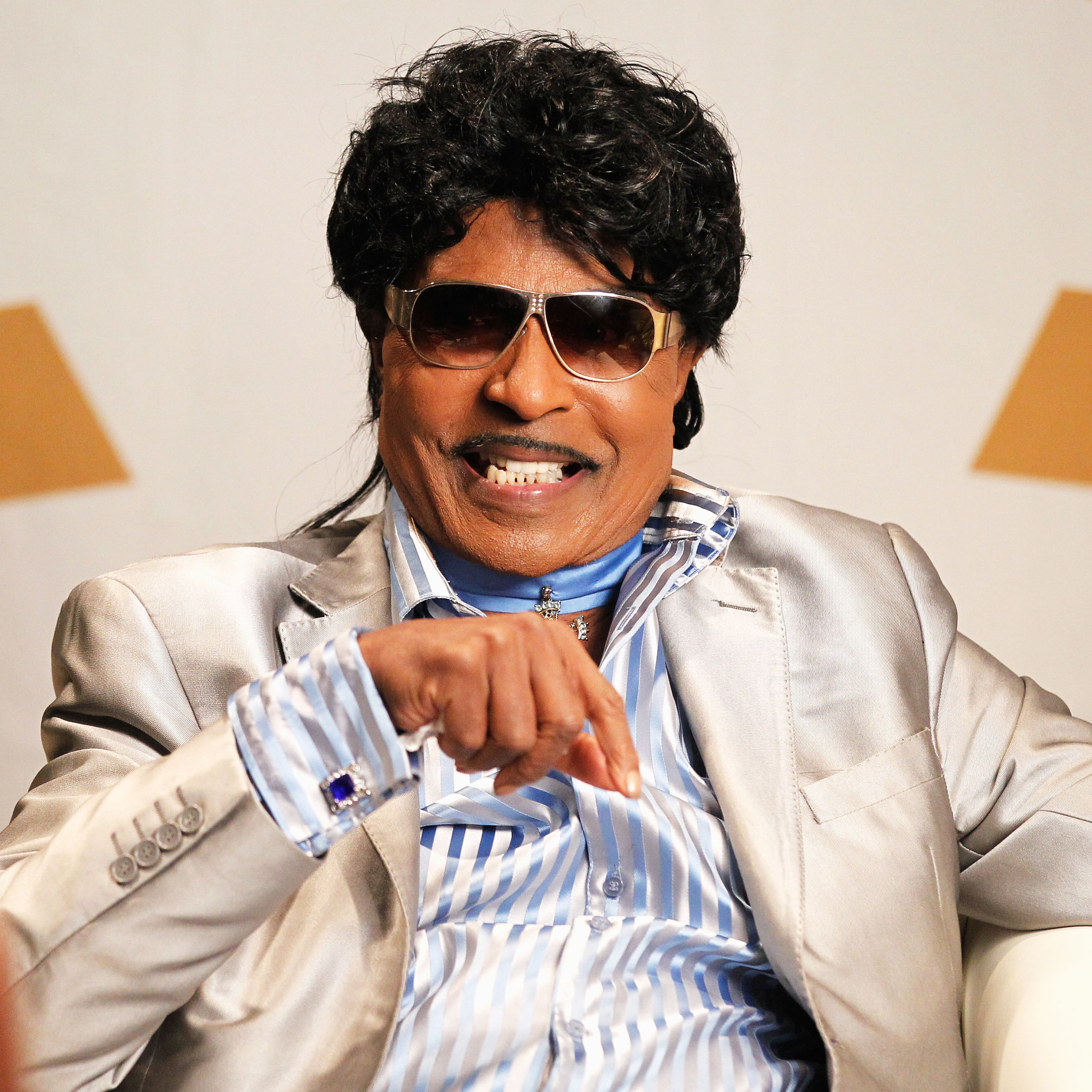 “There could not have been a Michael Jackson if there had not been a Little Richard.” PEOPLE Magazine”…a contemporary pop rebel like Prince seems like small potatoes compared with Little Richard, the original wild man of rock ’n’ roll.” NEW YORK TIMES BOOK REVIEW LITTLE RICHARD—the originator, the emancipator, the architect of rock and roll. Exploding into the American consciousness in the mid-50′s’…”awop-bop-a-loo-mop-alop-bam-boom”…he single-handedly laid the foundation and established the rules for a new musical form: rock and roll.

Born and raised in Macon, Georgia, the third of twelve children, Richard Wayne Penniman began singing in his local church choir while still a youngster. He signed with RCA Records in 1951 after winning a talent contest and released two singles—neither receiving prominent notice.

Returning to his job washing dishes in a Greyhound bus station, Richard sent a demo tape to Specialty Records, a fledgling Los Angeles label. The song, “Tutti Frutti,” was his catalyst for success and led to an uninterrupted run of smash hits—”Tutti Frutti,” “Long Tall Sally,” “Rip It Up,” “Lucille,” “Jenny Jenny,” “Keep A Knockin’”, “Good Golly Miss Molly,” “Ooh! My Soul”…By 1968, Little Richard had sold over 32 million records internationally.

A self-imposed hiatus took Richard out of the industry spotlight, but never out of the consciousness of the legions of fans around the world who confidently awaited his return.

In 1985, Richard charged back stronger than ever, scoring rave reviews for his memorable appearance in 1985 box-office smash “Down and Out in Beverly Hills,” a film which also launched his hit single, “Great Gosh A Mighty.” He was inducted into the Rock & Roll Hall of Fame in 1986 and launched into a pattern of work which has been virtually non-stop, encompassing not only recording, but television, films, soundtracks and commercials: “Martin,” “Full House,” “Miami Vice,” the 60th Annual Academy Awards, among other television guest spots; a duet with Philip Bailey for the Universal Pictures’ hit, “Twins”; background vocals on the U2/BB King hit single, “When Love Comes to Town”; the CBS Records all-star benefit album and Showtime/PBS documentary special, “A Vision Shared—A Tribute to Woody Guthrie and Leadbelly”; television pitchman for Taco Bell, McDonald’s, NBC-TV, Commodore/Amiga Computers and Revlon’s “Charlie” perfume, in which he starred with supermodel Cindy Crawford.

His performance of a rock ’n’ roll version of the children’s tune, “Itsy Bitsy Spider,” was a stand-out track on the star-studded Disney Records’ benefit album, “For Our Children.” The record went gold and earned millions for the Pediatric AIDS Foundation, an organization he continues to support. Disney followed up with “Shake It All About,” an entire album of children’s songs redone by Richard in a style that is his alone. His portrayal of a rock ’n’ roll Old King Cole in Shelley Duvall’s “Mother Goose Rock ’n’ Rhyme,” an appearance on “Sesame Street” and a spot on the Jim Henson Records album, “Kermit Unpigged” (on which he guests on the all-star song and video for a remake of “She Drives Me Crazy”), have ensured him a new generation of fans.

Richard was honored with a star on the world-renowned Hollywood Walk of Fame in 1990. Soon afterward, he returned to his hometown of Macon for the unveiling of “Little Richard Penniman Boulevard.” In 1993, he received the long-overdue Lifetime Achievement Award from the National Academy of Recording Arts and Sciences. He also performed for rock & roll fans Bill Clinton and Al Gore at one of the biggest parties in Washington—the inaugural gala.

In 1994, Richard received the Rhythm & Blues Foundation’s prestigious Pioneer Award. He also appeared on Elton John’s hit “Duets” album and delivered a high-octane rendition of “Something Else” with Tanya Tucker on the platinum MCA Records’ release, “Rhythm, Country & Blues.”

Most recently, Richard was presented with the prestigious Award of Merit byt the 1997 American Music Awards in recognition of his contributions to and powerful influence on the music world.

Driven by an incredible, hard-to-match energy which lends credence to his “wild man of rock ’n’ roll” image, Richard continues to tour extensively, delighting audiences with his unique blend of music and humor. “Entertaining is a way to spread joy,” says Richard. “I’ve come to terms with that and with myself. You’ve got to do that before you can begin to help others.”