You are here: Home1 / Exclusive Asian2 / Big and Rich 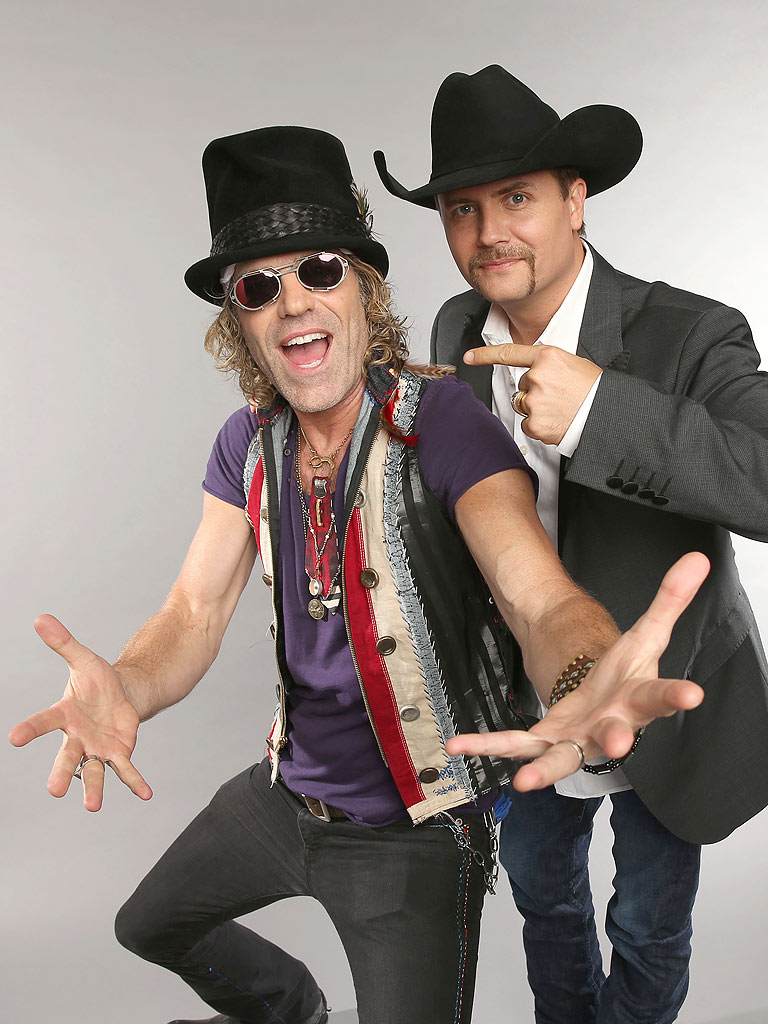 About Big and Rich

When it comes to Big & Rich, there’s no need for a typical bio. You can get a telling of their early career—separate and together–from the folks at Warner Bros. Nashville, or by Googling the dynamic duo. Their back story hasn’t changed, so why retell it?

I’m more interested in the biography of the choices they’ve made as Big & Rich. In their mixing of traditional country sounds with hip-hop, rock, and the occasional Native American yell. Their employment, in their Muzik Mafia troupe, of a painter who works on a canvas during B&R shows, and of a former Foot Locker salesman, called Cowboy Troy, who’s become the most prominent black country performer since Charley Pride—with one major difference. Troy raps. In Spanish, sometimes. As does Big Kenny, doing a little “hick-hop.” And then there’re their social messages, including “Love Everybody,” flashing on big screens behind them, and emblazoned on the back of Big Kenny’s guitar.

I’m curious, too, about the whole Muzik Mafia thing. That was the informal jam session they set up in Nashville, a town notoriously not interested in looseness—at least not when it comes to the music industry. Kenny Alphin and John Rich grew it into a scene and, ultimately, into a stable of talent, with several of the participants joining them in the leap onto the radio, the charts, and concert stages. Gretchen Wilson, anybody?

And so, one recent morning in Beverly Hills, in a hotel suite that could only be described as big and rich, and with two video cameras rolling, I asked the guys about their place in life and music. That place just happens to be the title of their third CD: Between Raising Hell and Amazing Grace.

John looked natty in black and blue—black hat and sport jacket; blue shirt and jeans. Kenny was all over the place, with patchy, fashionably tattered jacket and pants, along with his trademark top hat. This one was smaller than the usual, however. “It’s medium,” he said, “but it should be extra large, because my cranium is constantly pulsing with imagination and creativity welling up in it. It’s about to explode.”

As John moved, ever so slightly, away from Kenny, I asked why the call sheet for the session requested: “Please Not Sloppy.” Rich cast an eye at the publicist from Warner Bros. Nashville. “She might’ve meant ‘sloppy drunk,’” he said. “I think the beauty of the real us shines through,” said Kenny, “no matter what our bodies are clothed in.”

Lest you think that Big & Rich live only to jest, the new album will set you straight. Sure, there’s some of the “I throw Benjis out the window all day” bravado of their first two disks, but there’s far more grace—in words and music—than hell-raising.

The album’s theme, Kenny said, came from a conversation he had with a friend, “and the realization that between raising hell and ‘Amazing Grace’ is that fine line that we’re walking on all the time, trying to live life to its fullest and at the same time knowing that every day of our lives is a blessing. And I feel like, to those given much, much is expected. We’ve gotta reach out there and help those that need our help right now.”

Spoken like the son of a preacher man. Well, actually, it was John, who comes out of Texas and Tennessee, whose father was a preacher—a guitar-playing preacher, at that. But Kenny’s mother was the pianist at their church in Virginia. Both Big & Rich had spiritual grounding; both did a lot of Sunday singing.

And both credit their fathers for their love-everybody, help-thy-fellow-artist values. “Everything that’s happened in my life has guided me to be the person I try to be now,” says Kenny. “My father’s one of the most incredible people I’ve ever met. He’s a saint by all means, always trying to help his neighbor, anybody that he could.” As a musician, Kenny struggled, to the tune of huge credit card debts. But, he says, he continued to believe, “no matter what, that you’re gonna come out the other end and climb a top of a mountain. I’ve definitely felt that heartache enough times that it makes me truly compassionate.”

As a kid in Amarillo, John experienced poverty. He and three sibling lived with their parents in a trailer, and they went to the food bank for help. Still, he recalls, “I watched my dad take guys in off the street. He didn’t have anything to help anybody with, but he’d do whatever he could do to help people out.”

Kenny and John must’ve had heart transfer operations somewhere along the way. Although they began their Muzik Mafia jams before they broke through, they now use their power to help fellow artists. “When you see somebody who’s got the goods, you want for them not have to go through the same mistakes we had to go through,” says Kenny. John adds: “We all share our momentum and our contacts. That’s why we’re being rewarded so greatly, is because we’ve been so selfless with it.”

Flash back to Nashville, circa 1998. Suffice to say, both John and Kenny are struggling. Join the club. John’s been fired from the soft-country band, Lonestar, and is pitching songs left and right. Kenny, who’s anything but soft, is playing clubs all over town, drawing female admirers. One of them was dating John Rich.

“She wanted to go see him; her girlfriends were all going to see him, they were all in love with this guy Big Kenny, and I went OK, I’ll go check him out. He’s up there in all his bigness, doing country, rock and roll, and…Queen. It was very odd music, but it was good stuff.” After the show, a mutual friend introduced them. “She said the two of you should get together and write a song. There’s no telling what you all will end up writin’ because you’re so different.” Rich agreed to give it a shot. “It might be a complete fiasco,” he thought, “but I hadn’t seen anybody else do the kind of music he was doing; it interested me enough on a writing level to go, ‘OK, let’s see.’”

Rich didn’t know it then, but His Bigness was relatively new to professional music. He was building homes in Virginia when, one beer-soaked night, he agreed to go on stage at a pub and sing a song—the only song whose lyrics he knew: “Peaceful Easy Feeling” by the Eagles. Soon after, he bought a guitar, taught himself to play, and moved to Nashville. “I was listening to a lot of country music; it was the dominant music on construction sites and in farm shops. But a lot of those same people love rock and roll. I grew up as a real appreciator of all shapes and forms.”

So there you go. Kenny’s “bigness” referred to his range of musical interests. John Rich appreciated that range, and, after they began writing, and in 2001, while they were going nowhere slow with their respective careers, hit on the idea of an informal jam session on Tuesday nights, dubbed, for no good reason, “Muzik Mafia.”

“We realized that there was this whole bunch of us that were making all different kinds of music in different joints in town,” said Kenny. “We were all writing songs together, no matter what kind of music we were predominantly making, and we wanted to play them more often. So we decided, why don’t we get together one night a week and find us some little place where we can make music and not have to clean up afterwards?”

They got a club—The Pub o’ Love, capacity maybe 75—and never promoted the jams to the general public. But they caught on quick. “Within a few months they had to bust out the back wall. Other artists would show up. It was acoustic driven; we’d have percussionists come and play boxes or shakers. It was like sitting in a living room, learning from each other.” Among the students was a bartender, Gretchen Wilson, who’d take a night off to be there for the party, and “Cowboy Troy,” who’d drive down as often as he could from his shoe sales job in Dallas.

The Muzik Mafia has grown into a mini-empire. “The thing is, we still do Mafia jams in Nashville on Tuesday nights when we’re there,” said Rich. “There’s still no cover; we still don’t advertise it, but we’ll pull the tour bus out in front. It gets a little wilder. We’ve had everyone from Bon Jovi, Jewel, and Stone Temple Pilots, to hard-core country acts drop by. We’re still together. When you’re selling millions of records, when you’ve got a Tuesday night off, why aren’t you home? We still like to jam.”

Big & Rich made a lot of noise by incorporating rock and rap on their first albums. This time around, there’s soul and reggae, by way of John Legend, who does a cameo on “Eternity,” and Wyclef Jean. Rich went to see Jean, strictly as a fan, at the House of Blues in Los Angeles and wound up being pulled onto the stage. The crowd had no idea who Big & Rich were, he says, but Jean told them, “There are no boundaries. They tell us there are boundaries just so we don’t run past them.” Then, John said, “He starts free-styling about Nashville and Charlie Daniels and us, and how it’s all the same.”

Wyclef then indicated to John: “Your turn.” Rich froze for a moment, and then, over the reggae beat, went into “Folsom Prison Blues,” followed by “Save a Horse (Ride a Cowboy.” Suddenly, the House of Blues audience was his.

While Big & Rich appreciate any radio airplay they can get, they’re also proactive in other media, appearing on shows ranging from Nashville Star to Dancing With the Stars; issuing special-edition DVDs, and, now, publishing a book, alongside the new album. Entitled Big & Rich: All Access, and including—see?—a DVD, the book offers “a real behind-the-scenes look at our lives since we met,” said Kenny. “How yin and yang came together and went ‘BANG!’” As in the line from “Comin’ to Your City,” the title tune of their last album: “If you want a little bang in your yin yang; if you want a little zing in your zang zang…come along!”

Not that Big & Rich are repeating themselves. Last time out, they had Kris Kristofferson introducing a song. This time, they have President Harry S Truman opening the album with a call for unity, from a speech he delivered to farmers in 1935. They do AC/DC’s “You Shook Me All Night Long,” with a pronounced twang. They’ve got John Legend and Wyclef Jean crooning and riffing. They’ve revved up their message, from “Prejudice should not exist in music” to “Prejudice should not exist anywhere on earth.”

And if, indeed, Between Raising Hell and Amazing Grace has Big & Rich leaning towards Grace, that’s the idea, to take you to a “zone,” as Kenny would say. “Here’s a feeling we’re going to stay in, and thoughts we’re gonna express in a certain style for awhile. And then we’re gonna switch gears and rock your balls off.”

Jeez, Kenny. You’re the loving son of a church pianist; the self-proclaimed “Universal Minister of Love.” And the video cameras are still running. Take two: “We’ll do it like you’re listening to an album. Here’s the first side; it’s got this mood to it. Then you flip it over, and it’s got this mood to it. And we leave it on a happy note. We love our country, and we love it loud.”