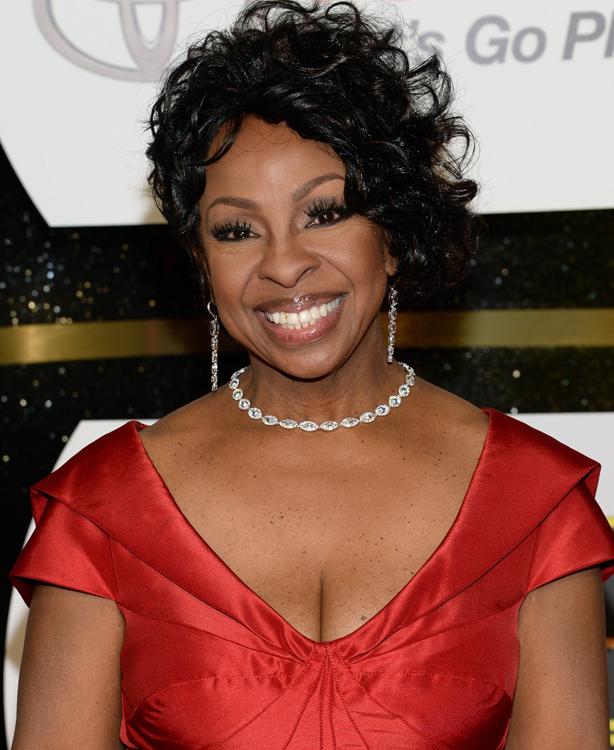 The great ones endure, and Gladys Knight has long greatest. Very few singers over the last fifty years have artistry. This eight-time Grammy winner has enjoyed #1Adult Contemporary, and has triumphed in film, performance.

Knight, known as the “Empress of Soul,” a longtime Las Vegas resident, returned to the Strip this past year to the famed Tropicana Hotel for a special engagement that ran in the newly named Gladys Knight Theater, making her the first African- American performer to have a venue named after her in Las Vegas. Last fall she was honored with the “Legend Award” at the 2011 Soul Train Awards. This spring Knight will release her newest album featuring the hit “I Who Have Nothing.”

Last fall saw Knight both honoring and being honored, first at a Michael Jackson tribute concert, and then at the 2011 Soul Train Awards. At the Millenium Stadium in Cardiff, Wales, Knight joined such performers as Jennifer Hudson, Beyonce, and Smokey Robinson in a tribute to the legendary King of Pop in a concert event called “Michael Forever.” Following that, Knight was honored with a “Legend Award” alongside fellow recipients Earth, Wind & Fire on the BET broadcast of the 3rd annual Soul Train Awards, hosted by Cedric the Entertainer.

A tireless humanitarian, Knight is an iconic supporter of the Boys & Girls Club of America. She just recently donated a Randy Jackson-produced song, “The Dream,” to motivate youths to fulfill their dreams, raise awareness of the need for BGCA, as well as create a way to support the non-profit through iTunes purchases. In the song itself, the choir singing along with Knight was comprised of members of the Bronx-based Kips Bay BGC, the same one that superstar and BGCA national spokesperson Jennifer Lopez grew up in.

In February 2011, Knight reunited with Elton John, Dionne Warwick, and Stevie Wonder for the irst time in 25 years for the anniversary of their historic “That’s what Friends are for” performance benefiting AIDS research at the Downtown Cipriani in New York. In addition to her constant touring, Knight performed at the Barbara Davis Carousel Ball for Hope fundraiser last fall, one of Hollywood’s biggest nights for charity, and last November appeared in the Macy’s Thanksgiving Day Parade. Adored the world over, Knight just finished a highly successful tour across the UK, performing at packed arenas that included a sold-out performance at Wembley Stadium, one of the world’s biggest venues. An institution not just domestically, but around the world as well, Knight’s moving live shows garner her enthusiastic standing ovations from audiences around the globe.

In December 2010, Knight released a new single – “Settle” – that was produced by previous collaborator Randy Jackson on his DreamMerchant 21 label. The single, which was featured in Tyler Perry’s film FOR COLORED GIRLS, will also be on Knight’s planned forthcoming album, also to be produced by Jackson.

Summer 2010 marked the debut of Knight’s – via collaboration with the LaRoda Group and Robert Rose Jewelry – highly anticipated line, the Gladys Knight Jewelry Collection, a stunning assortment of earrings, necklaces and bracelets that embody the spirit of Knight’s soul, beauty and charm. Combining fashion with an effort of social consciousness, the new collection includes handcrafted beads produced by West African artisans and cooperatives, as well as semi-precious elements. A portion of the sales from the Gladys Knight Jewelry Collection goes directly back to the Kumasi Women’s Cooperative in Ghana, an organization that supplies some of the beads.

Knight fans are still enjoying her last album, Before Me, which paid homage to the great legends of song – Ella, Duke, Billie, Lena – as well as the many artists who served as Knight’s friends, mentors, colleagues and inspiration throughout her career. Before Me features such timeless material as Holiday’s “God Bless the Child,” Horne’s “Stormy Weather,” and Ellington’s “Come Sunday,” and was helmed by Grammy-winning producers Tommy LiPuma and Phil Ramone. She is currently working on a new album with producer Randy Jackson, with whom she previously collaborated with on her Grammy-winning album, “At Last.”

Knight released her second collaboration with the Saints Unified Voices gospel choir, A Christmas Celebration, an album of holiday classics. Coming off of a “Best Gospel/ Choir Album” Grammy win with their debut album One Voice, Knight again directed the 100-member multi-cultural choir she formed, injecting their unique flavor and definitive soul into such Christmas staples as “Silent Night,” “White Christmas,” and a medley of “Winter Wonderland/Jingle Bells” among others.

Adding to her already impressive collection, Knight won another Grammy for her duet with the late Ray Charles on his posthumous album Genius Loves Company (2005). The duo won for Best Gospel Performance for their duet “Heaven Help Us All.” Knight’s solo album At Last also won a Grammy for Best Traditional R&B Vocal Album in 2002, and during the televised opening ceremonies kicking off the 2002 Winter Olympics in Salt Lake City, she performed the album’s “This is Our Time.”

A tireless performer who still wows audiences around the country and the world, Knight also finds the time to make forays into film and television. Most recently, she appeared in the Tyler Perry film I CAN DO BAD ALL BY MYSELF, and in a cameo on the Emmy- winning NBC hit comedy “30 Rock.”

Knight’s film and television credits include the holiday-themed HOLIDAZE, her first animated project to which she also contributed a track, UNBEATABLE HAROLD, NBC’s “Las Vegas,” former CBS hit “JAG,” HOLLYWOOD HOMICIDE, and former FOX talent competitions “American Juniors” and “Duets.” Knight has also appeared as a guest judge on FOX’s smash hit “American Idol,” and has performed in the show’s always star-studded finale. Knight also enjoyed a critically-acclaimed four-year run performing nightly at the famed Flamingo Hotel & Casino in Las Vegas, which was hailed “the number-one show on the Strip” by the Las Vegas Review-Journal, in the early 2000s.

Georgia-born, Knight began performing gospel music at age four in the Mount Mariah Baptist Church and sang as a guest soloist with the Morris Brown College Choir. Three years later, she won the grand prize on television’s “Ted Mack’s Amateur Hour,” and the following year, she, along with her brother Bubba, her sister Brenda and her cousins William and Elenor Guest, formed The Pips. In 1959, Brenda and Elenor left the group, replaced by cousin Edward Patten and friend Langston George. The group was renamed Gladys Knight & The Pips, and following George’s departure in 1962, the classic line-up was in place.

The group debuted their first album in 1960, when Knight was just sixteen. With Knight singing lead and The Pips providing lush harmonies and graceful choreography, the group went on to achieve icon status, having recorded some of the most memorable songs of the 1960s, 1970s and 1980s. Top 20 hits, like “Every Beat of My Heart,” “Letter Full of Tears,” “I Heard it Through the Grapevine” and “If I Were Your Woman,” set the stage for an amazing run in the mid-1970s, with Top 10 gold-certified singles like “Neither One of Us (Wants to be the First to Say Goodbye),” “I’ve Got to Use My Imagination,” “Best Thing to Ever Happen to Me” and the #1 smash “Midnight Train to Georgia” established Gladys Knight and The Pips as the premiere pop/R&B vocal ensemble in the world. The party kept rolling with hits like “On and On” from the Academy Award nominated soundtrack of Curtis Mayfield’s “Claudine,” the 1974 comedy about love in the inner city. Knight enjoyed another #1 hit in 1985 when she teamed with Stevie Wonder, Elton John and Dionne Warwick on “That’s What Friends are For.”

All told, Knight has recorded more than 38 albums over the years, including four solo albums during the past decade: “Good Woman” (1991); “Just for You” (1994); the inspirational “Many Different Roads” (1999); and “At Last” (2001). “At Last” showed the world that she still has what it takes to record a hit album, employing the talents of contemporary producers like Randy Jackson, Gary Brown and James D.C. Williams III, Jon John, Jamey Jaz, Keith Thomas, Tom Dowd and Tiger Roberts.

Her involvement in other creative undertakings, business ventures and humanitarian activities has been extensive, and has brought her honors from industry and community alike. In 1986, she produced and starred in the Cable Ace Award- winning “Sisters in the Name of Love,” an HBO special co-starring Dionne Warwick and Patti LaBelle. That same year, she showcased her acting ability when she co-starred with Flip Wilson in the CBS comedy “Charlie & Co.” Other acting roles followed on such TV shows as “Benson,” “The Jefferson’s” and “New York Undercover,” and in such television films as “Pipe Dreams,” “An Enemy Among Us” and “Desperado.” She recorded the title theme for the James Bond movie “License to Kill” (1989). In 1999, she completed a starring run on Broadway in the smash musical hit “Smokey Joe’s Café.”

In 1995, Knight earned her star on the Hollywood Walk of Fame, and the next year, Gladys Knight & The Pips were inducted into the Rock ‘N’ Roll Hall of Fame. Knight published an autobiography, “Between Each Line of Pain and Glory” (a line taken from her million selling recording “Best Thing That Ever Happened to Me”), in 1997, and the next year, she and The Pips were presented with the Lifetime Achievement Award from the Rhythm & Blues Hall of Fame. In 2004, Knight received the “Lifetime Achievement Award” at the annual BET Awards ceremony.

A humanitarian and philanthropist, Knight has devoted to various worthy causes, including the American Diabetes Association – for which she is a national spokesperson, the American Cancer Society, the Minority AIDS Project, amFAR and Crisis Intervention. She has been honored by numerous organizations as well, including the NAACP Legal Defense Fund, Congress of Racial Equality (CORE), B’Nai Brith, and is a recent recipient of BET’s Lifetime Achievement Award.

Today, Knight helps oversee her busy career from the Las Vegas headquarters of Shakeji, Inc., her personal entertainment corporation. She is a mother, great-grandmother, performer and a businesswoman with a spiritual outlook on her life. Her faith in God has been the driving force behind all of Knight’s endeavors, guiding her through her many successes.