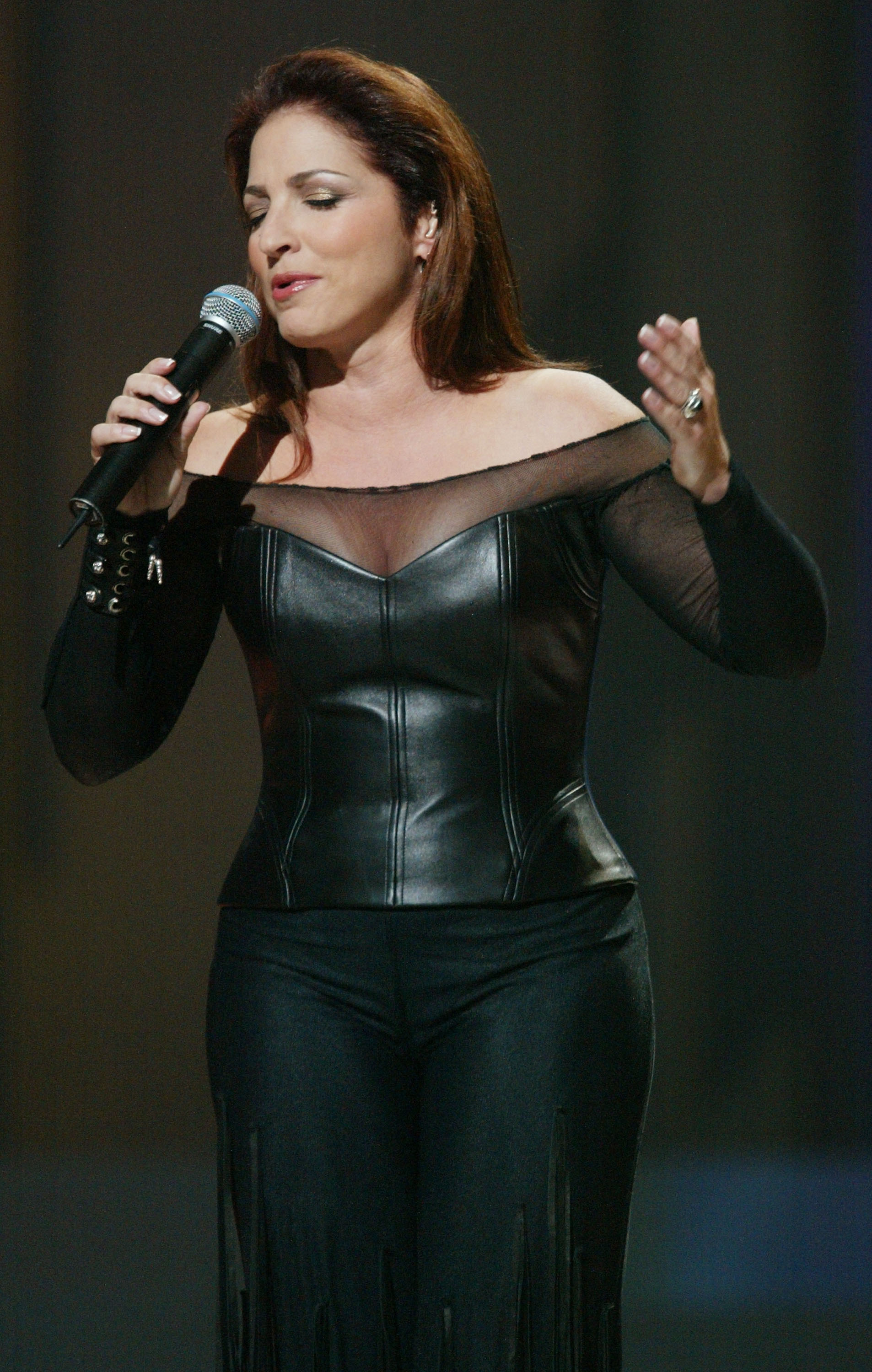 There are singers who can captivate a community. There are vocalists whose sound can penetrate deeply into your soul. There are entertainers who can mesmerize, enlighten and entertain, all in one breath. Gloria Estefan who does it all, effortlessly.

Gloria Estefan is a true original. With over twenty years in the music industry to her credit, the woman who broke down musical barriers and set a higher standard for all genres of music has returned with a penultimate album that continues her artistic mission statement.

“As an artist, I feel like my mission is to entertain. And more importantly, to give people a way to say things,” says Gloria. Songs have always done that for me-given me a way to express myself. There are so many people who have told me that my music helped them through a rough time in their life. What can be better than that? I just have to continue to grow so that I can continue to make music that inspires my listeners.”

The result is an amazing piece of work from a gifted singer/songwriter and producer. The entire CD was recorded live, giving the album a raw, uncensored vibe that is pure and intense. All of the musicians and vocalists collaborated together, recording their takes simultaneously, which gives Unwrapped a powerful cohesiveness that brings musical excellence from the intro to the finale. For the first time, Gloria flexes her muscles as a producer. Along with her husband and long time producer, Emilio Estefan and Sebastian Krys, who has worked on her projects for many years.

“Sebastian is one of our prime producers and an incredible, Grammy-winning engineer,” says Gloria. “And he ended up becoming one of the primary writers on this album.”

In addition to branching out in terms of production, Gloria wanted to invite musicians that would give Unwrapped a distinct sound. The one and only Stevie Wonder was at the top of Gloria’s wish list and Stevie needed no convincing. His amazing harmonica solo and unmistakable sultry voice appear on the sexy and soulful “Into You.”

“I love and adore Stevie Wonder and have worked with him on many occasions,” says Gloria. “But this is the first time we’ve recorded together. He has been a major influence on me as a writer, as a musician and as a singer. I gave him a call and he said, Gloria, we’re family, I’m there.’ He not only threw down an incredible harmonica solo but he also sang on it and I will forever be thankful.”

Gloria was very interested in having musicians who’d influenced her growth as a singer/songwriter appear on Unwrapped. Which led to her electric duet, “One Name,” featuring Chrissie Hynde, the noted singer-songwriter-guitarist from The Pretenders. “I was fortunate enough to work on a great show called Women Rock & Girls with Guitars about a year ago.” explains Gloria. “I did a duet with Chrissie and we got along great and I really admire her. I invited her because I wanted a couple of key musicians who had made an impact on me throughout my life to join me on this and I think it’s a great combination.”

Musicians who are not yet household names also earned pride of place on Unwrapped. Manu Katache, a drummer from The Ivory Coast who has played with Sting and Peter Gabriel, performs on several tracks. “His sound combines jazz, rock and African rhythms seamlessly,” says Gloria. “Since we recorded together, just watching him brought out something different in my singing.” Gloria says she wanted the album to be like a photo album, filled with snapshots of her life and the journey from there to here.

Unwrapped is a musical journey through one woman’s life. And it is as inspirational and heartfelt as the diary of a true survivor. The album begins with “A Little Push.” With a brooding bass line, Gloria’s voice is as strong and forceful as ever. On a spare track with strong guitar riffs, Gloria weaves an inspiring tale of the little push that often leads to love. It invokes the butterflies that flutter in your stomach when you first fall in love. And the timelessness of the sentiment is unwavering.

“Te Amare” invokes the heat of Miami, with splashes of regatone or Jamaican dance hall as well. “Usually this kind of music is programmed but we wanted to do it live so we got the mandolin and the cajones and this song just became one of my favorites. I’m talking about a journey-both literal and figurative-something we can all relate to.”

One of the most wrenching songs on the album is “Your Picture,” a haunting ballad that features a touching guitar solo. With true love, the colors may fade but the feelings never do, just like a photograph. The subtlety in the songwriting makes this song feel like it could be dedicated to a lover, a friend or a child. But for Gloria and Emilio, it has a special meaning.

“Emilio and I had a portrait done for his parent’s 50th wedding anniversary about ten years ago. It’s a really beautiful picture and it inspired this song. His parents were like my own parents. His mother used to travel with me and take care of my son. And Emilio’s father passed away on Emilio’s 50th birthday this year. But this picture is just as bright and vibrant and special. No matter what, nothing can fade that.”

Unwrapped runs the gamut, from inspirational enlightenment about the human condition, “Time Waits” and “One Name,” to gutsy love songs that lay out all emotions on the table, like the spiritual “In the Meantime” and “Wrapped.”

“One Name,” the duet with vocalist Chrissy Hynde, begins with a line about a man living under a bridge. “That song was inspired by a man named Edgar who was actually living under a bridge near my house,” says Gloria. “The message here is that regardless of our experiences, we all want and need the same things.”

“I Wish You” is a power-ballad that shoots directly for the heart, pulling no punches. Telling someone that you love them, and wish them the best, even when they have wronged you, is often harder than when they have not. The concept, underscored beautifully, with sublime production, is a wistful goodbye that manages to empower the person who is being hurt the most.

Letting go and giving into the seduction of Unwrapped is like glimpsing a collection of well-worn photographs. The track “You” was inspired and written for her daughter Emily but could easily be for any love in your life, even that of God. “Say Goodbye,” a sweeping, cinematic, theatrical ballad conjures up a woman faced with challenges, praying for strength in tough times.

“The instrumentation lends a lot to those feelings,” explains Gloria. “We used vintage instruments that made the live recordings feel intimate. We wanted it to feel almost like nature-very warm and organic. The band used traditional instruments to replace what would usually be western instruments. Instead of bongos and congas, we used the cajones. We also used vintage keyboards, vintage hollow body guitars and even vintage amps. We got some really cool sounds that way. We wanted to combine the feel of the 1970s with a very modern sound.”

In addition, four songs, “Te Amare,” “Tu Fotografia,” “Hoy,” and “Mientras Tanto” have been translated from their English versions. It is a special treat for not only her Spanish-speaking fans but also those who are mesmerized by her delivery in her native language. The lyrical highlight of the album is a song called, simply, “Famous.” The last line is chilling in its simplicity.

Why should I have to defend or deride? Most of the rules of the game I’ve defied. Though it’s been hard on my pride. It’s been one hell of a ride. Curiously, I never set out to be famous”

Once again, Gloria’s mission is accomplished. As an entertainer, a vocalist and a writer, she has invited the world into her heart. The result is nothing short of incomparable.

Unwrapped is yet another monumental landmark in Gloria Estefan’s esteemed career. For over twenty years, she has been a mainstay in both the Latin and pop music worlds. Her start came courtesy of her husband, Emilio, who was fronting The Latin Boys. In the late 70s, Emilio asked Gloria to join as the lead singer, and later to join him as his wife. She accepted both offers. The group became Miami Sound Machine and by the ’80s, they were known for their top-selling, chart-topping albums like Cuts Both Ways, and Let It Loose and a string of hit singles, including, “Conga”, “1-2-3-4,” “Anything For You,” and “Rhythm Is Going to Get You.”

Overall, Gloria Estefan’s illustrious career has included recording the official theme for the 1996 Summer Olympics, three Grammy Awards, one Latin Grammy Award for directing her first video, “No Me Dejes De Querer,” an Oscar nomination for the title song for the movie “Music Of The Heart,” which she also appeared in, opposite Meryl Streep. With over 70 million in worldwide record sales, Gloria Estefan is the most successful Latin crossover artist in the history of pop music.