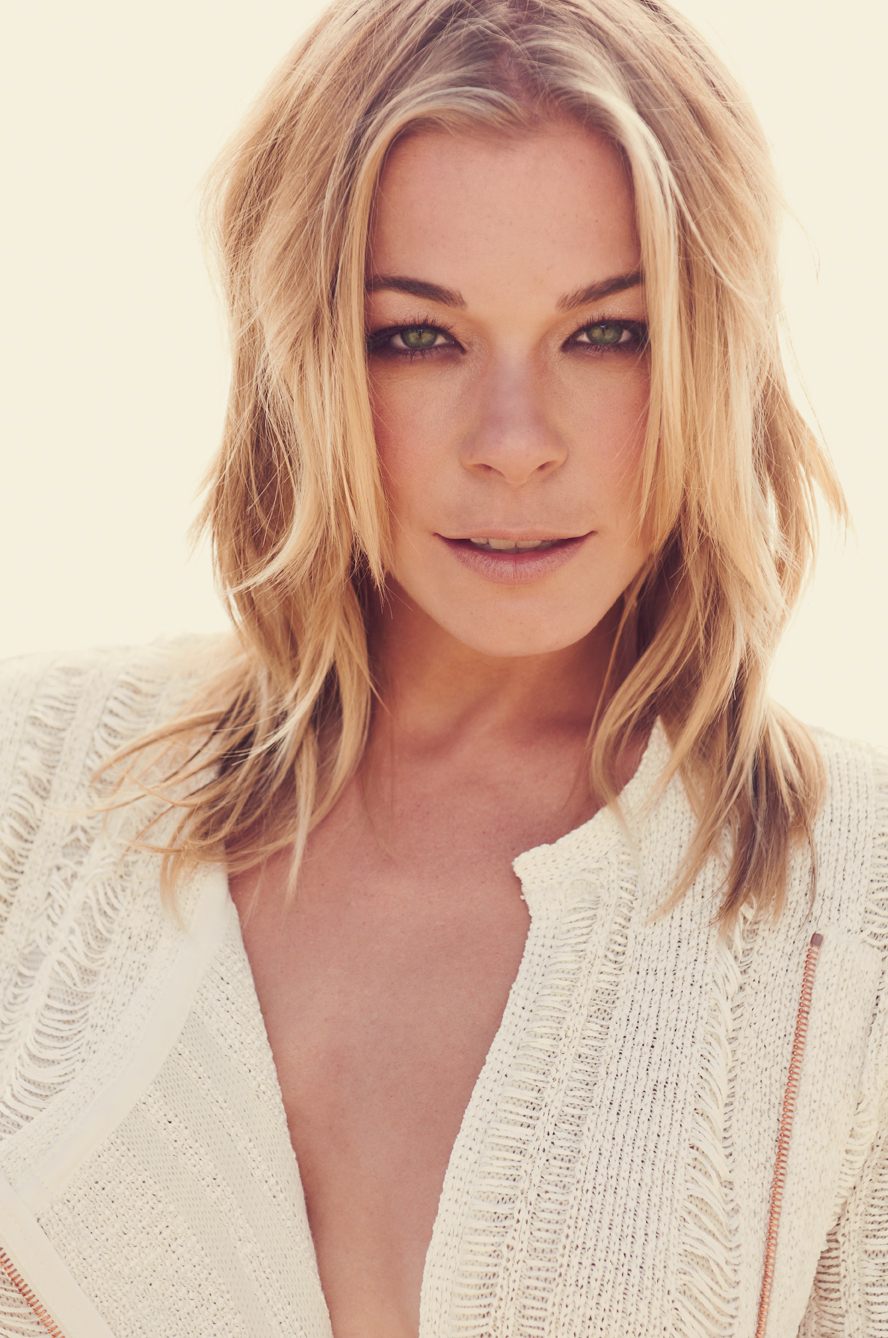 When a performer grows up in the spotlight, it’s often hard for public perception to mature along with them. Some people still picture LeAnn Rimes as the pretty 13-year-old with the incredible voice who first burst on the national scene with the hit “Blue.” In reality, LeAnn Rimes is so much more. As an artist, she’s matured into a songwriter of considerable depth and as a vocalist; she’s grown into her gift in an even more impressive way.

Her new album, “Family,” marks the first time LeAnn has written or co-written every song, and the result is a collection that reflects where she is at this season in her life. “I’m just completely baring my insides,” LeAnn confesses. “I think people feel like they’ve known me for so long. They’ve grown up with me and I’ve grown up with them. A lot of people believe what they read and what they see on the surface, but there’s so much underneath for me as a human being, not as an artist, and that’s where this is coming from. It’s coming from real life. What I’ve lived outside the whole fame and fortune world is real life, real relationships, hardships, pain and real honest emotion. That’s where it’s coming from.”

LeAnn readily admits it’s not easy to be lay her soul bare for the whole world, yet there’s also a freedom in becoming that transparent. “It’s hard to be that vulnerable, but it’s exhilarating all at the same time,” she says. “It’s therapy for me. I’m definitely accepting myself for who I am. I’m loving that and letting it speak for itself, loving my real emotions and letting who I am come across in my music and lyrics. It is exhilarating to know that what I’m putting out there is really me as an adult and not me as a kid singing someone else’s songs. I’m not discrediting anything that I’ve done. I’ve had incredible hits written by some great writers, but I finally felt that it all came together on this record. It’s incredibly exciting.”

LeAnn will be 25 on August 28, the day her new album hits store shelves. Born in Jackson, Mississippi, LeAnn’s talent was obvious at an early age. She won her first talent contest at age five and at seven she had recorded her first album. By then her family had relocated to Garland, Texas. She began honing her skills as a country artist performing on Johnnie High’s Country Music Revue in Ft. Worth, a popular show that featured local artists and national acts. LeAnn recorded her second album at the tender age of 11. That project that featured “Blue.” It caught the attention of legendary record executive Mike Curb who signed her to Curb Records.

The rest has become history. She has won two Grammy Awards, including the first Best New Artist accolade ever won by a country artist. She has sold more than 37 million records, won an American Music Award, three Academy of Country Music honors and 12 Billboard Awards. She’s scored numerous hit singles, among them “One Way Ticket,” “I Need You,” “Nothin’ ‘Bout Love Makes Sense,” “Probably Wouldn’t Be This Way,” and “How Do I Live,” which spent a record-setting 69 weeks on the Hot 100.

She has written children books, acted in film and on television and has become a musical icon both in the U.S. and in Europe. In 2006, she released “Whatever We Wanna” in Europe, a successful pop album for which LeAnn co-wrote 10 of the 15 tracks. LeAnn has become confident enough as a songwriter to pitch tunes to other artists and has songs being considered by Faith Hill and Jamie O’Neal.

Along the way, the little girl with the big voice has matured into a woman, and the songs on “Family” reflect her priorities in life. “This whole album is about real relationships,” says LeAnn, who has been married to husband, Dean Sheremet for five years. “It talks about relationships between a husband and wife, between mother and daughter, and also my friends, who are very much my extended family.”

LeAnn sees “Family” as the first in what may become a trilogy. “This is a clarifying record for me, talking about what I’ve gone through and digging through that a little bit personally,” she says. “I feel like this may be the beginning of three records for me with this album being kind of the clarification, the next record being the growth and kind of sifting through where I’m at and where I’m going, and maybe the third record of eventually becoming a mom. It’s like closing one chapter in my life and moving on to a whole other one. I feel like there are three records coming and this is the beginning.”

Though the songs on “Family” are intensely personal, LeAnn has also managed to create music that is universal in its appeal. The challenges and triumphs she chronicles represent experiences everyone can relate to. “I wanted to write so that people would be able to find themselves in the songs and hear their stories,” she says. “It’s part me and part them. That’s why I really wanted to call the record ‘Family’ because I really feel like as they’ve grown up with me, I’ve grown up with them. The whole world kind of became my family in a way. Everybody’s known about every part of my life, including all the trials and tribulations I’ve gone through personally with my family. I felt like it was time to share those really deep, honest thoughts with everyone.”

Opening her heart and pouring such feeling into the songs on this album propelled LeAnn’s vocals to another level. Never has she sounded more confident and more compelling, particularly on the poignant ballad “What I Cannot Change.” It’s a song about forgiveness, acceptance and personal growth that finds LeAnn delivering a performance that is achingly vulnerable yet carries an underlying current of rock solid strength. “I feel like there’s such a vulnerability especially at the beginning of the song,” she says. “I feel like there’s a strength that grows. That’s how my life has been.”

During a recent concert, she was amazed at the impact the song had on her audience. “I performed it for the first time the other day at a show and I knew not to look down at the crowd, because somebody was going to be crying and if I saw them, I would lose it,” she relates. “When I was done with the song, I opened my eyes and the whole crowd was bawling and the whole crowd just stood up at once. I lost it for about five minutes and I could not stop crying. I just realized the magnitude of what I had done–to have written a song that moved people that much. It’s not someone else’s words right now. It’s my words and I’m really attached to them. It’s pretty intense. I’ve never had a project before that I’ve felt this way about.”

LeAnn’s new songs run the gamut from the autobiographical title track to the light-hearted up tempo “Nothin’ Better to Do,” the album’s first single. There’s an engaging duet with Louisiana born singer/songwriter Marc Broussard on “Nothing Wrong.” LeAnn recently recorded “Strangers,” a sultry duet with Jon Bon Jovi that appears on Bon Jovi’s new album, “Lost Highway,” and as a bonus track on “Family.”

To produce her new album, LeAnn again turned to Dann Huff. “Dann is one of my very best friends, first and foremost,” says LeAnn. “I’ve worked with him on several projects now and I knew he was the right person because we’re both very honest with each other. I knew I would push him to places that he’s never gone and he would push me to places that I wasn’t comfortable going.”

That creative chemistry has produced an album that is a landmark in an already distinguished career. It chronicles the myriad relationships and experiences that have shaped the life of one of America’s most successful artists. But more than that it represents the growth and maturity of a young woman who has grown up in the public eye, and unlike many of her pop star peers, has avoided the pitfalls of fame. “People are just waiting for you to self-destruct because that’s what happens,” she says. “I just wanted to prove people wrong. It’s been really hard at times, but I feel like I’m in a really good place right now. I’ve gone through the ups and downs, but it’s never what you do when you’re up, it’s what you do when you’re down. I know that the success that I’ve had, and am having, is rare for anyone, but especially anyone who started as a kid. I have been very blessed. I’ve had my moments. I’m a human being like everyone else, but I really feel like I’ve made a conscious decision to learn from all of those moments.”

LeAnn Rimes has learned from the moments that have defined her young life, and she’s poured those experiences into her music. She’s no longer the teen with the big voice. She’s an intelligent, mature young woman with much to say. “I do feel like I’ve become this artist and not just this voice,” LeAnn says. “I think that people have known me for that. I accept that and I appreciate that, but there’s this whole other side of me that’s always been there, I’ve been writing my whole life, but never have I felt confident enough. The confidence I felt in my singing is now how confident I feel in my writing. That’s an exciting place to be and a new place to be. I’ve been in this business for 21 years now and to actually have a new and an exciting place for me is something that feels fresh. That’s a good place. I feel like I’m really moving forward and growing as a human being and as an artist. It’s a good thing.”